I am part of a songwriting group where we write songs and bring them and share them with other songwriters. We have a monthly theme and assignment. We co-write, we do shows together sometimes, we have a great time. We meet at a winery after hours and have a few sips of the leftover tasting wine. It’s sort of a mix between a lude, boozy book club, and holy eucharist. I’ll explain.

The last time we met, the assignment was to just write a song and explain your process to everyone. My process was to take an old song I had written 20 years ago, and then translate it into Spanish. I’ve done it before and it’s impossible. I can’t do it. I end up rewriting the lyrics to the song but keeping the music usually. Sometimes the music changes too. In the process I change, or at least I learn something about myself that I didn’t understand before. Here is an example of another song where I did the same thing, it was originally called Broke Dream, Country Travelin’, Railroad Blues, and I wrote it in my 20’s. I rewrote the lyrics for Monkey Lizards in my 40’s and the song is called Casa de Sueños. If you don’t speak both languages, you’ll have to take my word for it, they are different.

The other part of my process was to write and record the song in an earthship. We went and stayed in one of those off the grid outside of Taos, New Mexico over spring break this year and it was amazing. They are these houses made from mud and trash that need no running water, electricity, or any government “help” to function. They are heated by a greenhouse with food. Banana trees growing happily in the desert! Anyway, it goes on and on, home sweet anarchy! Also, New Mexico is home to the most beautiful sunsets in the country, and roughly half of what I still have of a heart.

We played our songs and talked about them. I talked about how hard it is to rewrite an old song, something I have been doing more of lately. I also played a new song I wrote on the trip that felt full of life. In songwriting and recording and playing, you always get to experience that newness. While playing the songs and talking, I had the thought that we are all looking for what Jacob was looking for when he found that angel in the middle of the desert and beat him to a bloody pulp so that he would be blessed by him. That is what I realized songwriting is like. When you write a new song, you are wrestling with an angel. You know that you might never get another chance so you hold it down kicking and biting and cussing. You fight all night until you have won, and you can demand that it give you it’s blessing.

That’s when you find a new song to write. When you rewrite one of your old songs, you are wrestling with yourself. And that can be a much more dangerous matchup, especially if one of you has to lose.

California has had some brutal reminders of its own mortality lately, mudslides after the worst fire in state history that killed and displaced people, fires in Napa and Sonoma that came close to my own hometown and took the homes of families of people I know. For some reason all of it summarized in a metaphor of this boiling river of wine running through Santa Rosa. Contrast that with this unseasonably beautiful weather we are having that has been allowing me to take some of the best hikes anyone can ever imagine in any winter: 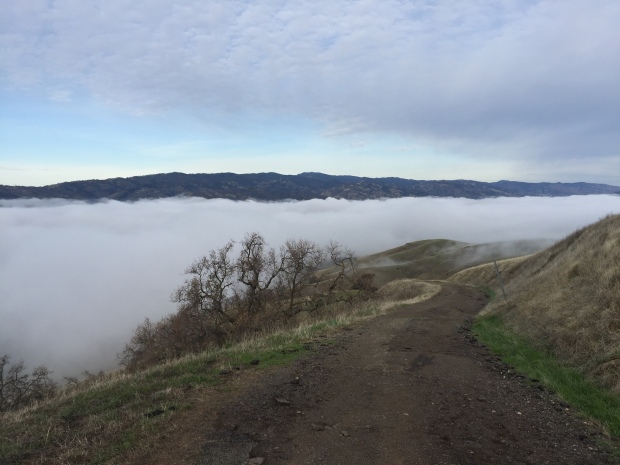 Combine that with the winery shows we’ve gotten to play lately:

Two in December, dubbed “The Ugly Sweater Sessions,” and one last Friday. We’re singing about Love, death, Star Wars, openness to life, parallel universes, mutant zombie spider apocalypses, and God in profane places. Mostly people don’t notice the words because they are too busy having a great time, which makes me happy. Whatever I can do to contribute to that. Whatever I can do to put my heart into it all because you never know what the next harvest or fire season might bring. In California, that which is ominous is often the opposite of what terrifies Westeros. Summer is coming…

Our first record is finally finished and available to the public. It was about a year in the making, or maybe longer. I wrote about twenty songs in the past year to come up with the most groovy record I could, and we settled on 10 of them. What did it take? Lots of nights in my basement playing and recording while my kids were “asleep” above us. As a result, the songs have a more mellow feel than they might otherwise since Brian played with brushes a lot or used a Cajón for some of the acoustic tracks. The songs are about love, devastation, Kylo Wren turning to the darkside, finding your parallel self in the multiverse, reminiscing, sunglasses to fight fascism, and hope. My friend Tim Nenninger mixed and mastered it in Albuquerque, NM the place where much of my heart still lies. We plan to do an album release show to kick off the summer break (two thirds of us are teachers), and some shows and street playing over the summer. You can purchase it or stream it on any of your favorite digital platforms, crank it up, put the top down, and enjoy the ride.

Here is the iTunes link!

Have you ever wondered how band names come about? It’s harder to name a band than you might realize. Everything needs to come together in just the right way. Here’s our story.

We have been playing together for about a year now. Brian Surano our drummer is family. He and I have been talking about playing together forever and when I moved back to California after being in New Mexico for over a decade, we finally had our chance. We started jamming some of my songs that I had already recorded and played but I knew I needed to write some new ones. I started doing that while we thought about how we were going to find a bass player.

I’m not a famous rockstar just a teacher, and I was at a conference for bilingual educators in San Francisco with Miguel, also a teacher at my school. The conference was last spring and ended on Good Friday. He and I decided to go to the Mission district for food and tequila. After hanging out a bit, we decided that since it was Good Friday we should go to church. So we stumbled over to the National Shrine of Saint Francis of Asisi and found the door to the original chapel. We went inside where mass had already started, found a pew, and joined in the singing. After a while we were lead to the main church where we joined the larger congregation mid-song, perfect timing and almost the same key, like a throng of lost and cast-out angels. This may not seem like a normal place for a kick-ass rock band to begin but the music was beautiful, and I love music. Also symbols. During one of the hymns, a giant cross was passed around like Kurt Cobain’s body over a sweaty and frantic mosh-pit. The only way for it to make it around the building and back to the altar was for several people to pass it on at once. So Miguel and I carried the cross together, stumbled out onto the street, buzzing both from the effects of the tequila and the spiritual experience we had just had. At this point my brother, who lives in the Mission and is a musician, was home and beginning his rehearsal for an upcoming show he had with his band Rad Cloud, a surfy lounge-rock band. I asked Miguel if he played music, he said he played bass. When we got my brother’s place, I grabbed an electric guitar and Miguel started thumping on the upright bass while we played alongside and within a loungy cloud of radness. The search was over.

Since then we played a couple of house parties but mostly worked on writing and learning new songs and trying to record them. When we finally finished the album (more on this later) and waited for it to be mastered, I started an informal focus group about the band name. We wanted something that sounded cool but a little light-hearted. Something that represented us and that would help us take the world by storm. The problem is that every name we could think of that seemed reasonable was already taken. Every single one, there must have been about 200 we tried. If you don’t believe me try it out for yourself, I dare you, anything you think is cool is taken. For a while we had been wanting to call ourselves “The Sawed off Buskers.” The problem with this name was two-fold. First of all, nobody in the U.S. seems to know what a busker is, so that was working about as well as a joke where you are constantly needing to explain the punchline. Second, the way our lives are, we knew we wouldn’t be able to play on the street enough for a band with buskers in the name and we didn’t want to be just a bunch of posers. So we kept at the name thing and nothing was working. Finally, my eight-year-old son found out what we were doing and demanded he be a part of the process. He became obsessed and wouldn’t let it alone until I finally told him to come up with his best three names, write them down, and that I would consider them. Every name had a type of lizard in it and I kind of liked this one. I took the name to my high school students and they also seemed to like the idea. It didn’t hurt that Jabba the Hutt’s side-kick in Return of the Jedi is also a Kowakian Monkey Lizard. All of these pieces were fitting together too nicely so finally a name, and a band were formed.

We crawled out from under our rocks and played our first show as Monkey Lizards at The Rock House in Livermore on April fool’s. Miguel and I are both teachers at a local high school and it was the beginning of our spring break. We had a great time, played our songs, talked with friends, and met new characters. Then I headed to the desert in Albuquerque, NM where so much of my creative inspiration comes from. I was scheduled to play at a music festival there that was cancelled. Instead, I met with my long-time friend and tamalewood producer, Tim Nenninger from Timbojo Productions who mastered our album for us. I then tried to round up my friends in Burque to meet me at a park in the South Valley for a picnic and an unplugged show. It was a crazy weird time and a great way to end my spring break and all the work we did on the recording, which is now available for downloading and streaming everywhere. Now I’m back to teaching and looking to set up some more shows in the future. Stay tuned!